Active in Communities Throughout California

Absolute Bail Bonds’ agents enjoy going out in their communities and meeting their neighbors. Here are some photos of events we’ve recently attended. 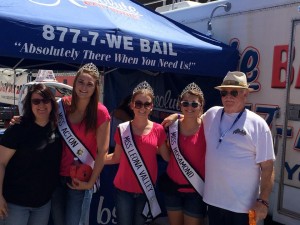 Thunder has been an enormous success with attendance totals of over 14,000 visitors, nearly half of which attend the headline concert on Saturday night. At the 2013 event Thunder on the Lot raised over $250,000 bringing our year to date total to over 3.8 dollars. All to benefit the kids who need it most in the Antelope Valley. The Kids Charities of Antelope Valley has raised over 4 million dollars since 1995, 3.6 million of which came from Thunder on the Lot proceeds. These funds go directly to supporting the “Kids Charities of the Antelope Valley.” 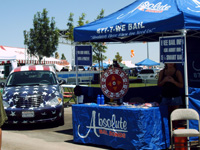 In Antelope Valley attendees at “Thunder on the Lot” in June 2007 had the opportunity to win T-shirts, key rings and other prizes at our booth. We were proud sponsors of this annual event that has raised $1.2 million for children’s charities in the Antelope Valley.

More Absolute Bail Bonds goodies were handed out at the Victorville Harley Davidson’s “Hot Rods and Harleys” show in June. Local agent Diane and her family enjoyed meeting members of the community and admiring the cars and bikes. 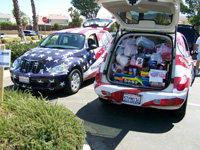 There’s no better place to celebrate 4th of July then a rural town’s parade! With the theme “The Wild West,” Acton, California’s annual parade seemed the perfect place to display one of our wrapped PT Cruisers. Proceeds from the event benefited the local community center where various clubs hold their meetings and fundraisers. 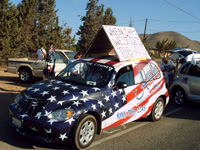 It’s Christmas in July! Since Santa was busy at the toy shop, an Absolute Bail Bonds’ PT Cruiser stood in for Santa’s sleigh. “Christmas” was held at the 4th Saturday Cruise in Palmdale, CA. Thanks to all the attendees, two of our Cruisers were filled to the brim with toys for local charities. Many kids will have a Merry Christmas thanks to Bill and all the show participants!